skip to main | skip to sidebar

My Sister Julie Is Dying 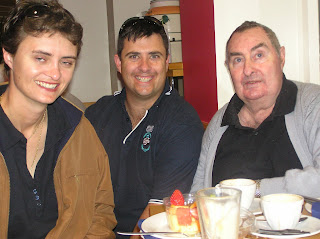 My sister Julie is dying. She is about 66 years old and has myelo fibrosis. She is probably going to die in the next day or so.
She is in a hospital in Brisbane and has now been given the sorts of narcotics that deaden the pain and ease death.
In about 5 hours I am flying to Brisbane to be with her in her last few hours/days.
She is being lovingly looked after by her children Tony And Kim. Her husband Gordon is also in Brisbane but he's ill too and in need of support.
What can I say. I've never been really close to my sister but in recent years, especially in the last month or two I've realised how important we are to each other. I rang her when she was in hospital a few months ago and she brightened.
I could cheer her up. That at least was important. 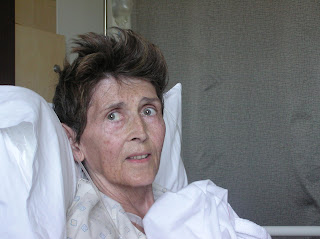 So I went down to see her (Cairns to Brisbane) a month ago and took these pictures. I'm sure I cheered her up a little and saw her improve in health markedly over a few days (coincidentally of course).

She had had 4 operations in one day! She had her spleen removed but the doctors couldn't stop the bleeding. That was a month ago, she's been pretty steadily getting better it seemed but just yesterday she suddenly worsened and she's now deathly ill.

So in a few hours I'm leaving to see her. Am listening to Shane Howard. His music is gentle and comforting.

I wrote a song based on something Julie said to me about a month ago and here's a very rough recording of it. I sang the song to her in hospital a month ago.

She said to me yesterday on the phone "I've got to go" I guess she really meant it.
Posted by Steve Baker at 7:31 AM No comments:

Steve Baker
Cynical, overworked (aren't we all). Often smiling but apparently I'm a bit strange. I think that everyone else is strange. Someone is wrong. Apparently it's me.